Guernsey Bank is a small, privately owned Ohio bank that is approaching bank foreclosures in a revolutionary way: they are fixing up homes and renting them out until the right buyer comes along. This practice is contrary to most banks’ tendency to credit bid on their foreclosure auctions, keep the usually beaten-up properties vacant and dump them to the first reasonable buyer. Federal regulators favor this approach because of their discomfort with banks holding distressed loans or assets on the books. For this reason, lenders frequently accelerate lawsuits and foreclosures on troubled loans when a more conciliatory approach may keep businesses afloat and families in their homes. 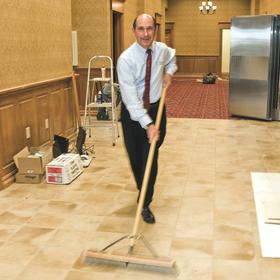 Guernsey is giving regulators pushback by embracing a different philosophy: retain, repair and rent foreclosed homes. Bank president Robert Patrella concluded a few years ago that there was a better way to deal with bank owned properties. “Most all of them were trashed,” Patrella said. “They were in the worst possible condition. It didn’t make sense to try to sell a house worth half what was owed on the mortgage.” Instead of dumping the houses, Guernsey invested between $10,000 and $50,000 per home, became property managers and collected rent until a buyer could be found. For example, one house needed a new roof, exterior trim, a garage floor and doors, drywall in some rooms, paint throughout, carpet, appliances, a kitchen counter and sink, and a new driveway. Also, basement walls were badly buckling, requiring the bank to trench around the home and shore up the walls.

Most banks would have sold this house “as is” instead of investing about $45,000 repairing the home. Guernsey expects to recover its investment and much more in addition to booking rental income on the home.

Guernsey’s approach to foreclosures is at the forefront of lenders’ innovative approaches to the national foreclosure crisis, but the bank is not alone. The Museum of Modern Art also responded to the crisis by sponsoring a study amongst several teams of architects, landscape engineers and urban visionaries to explore a revision of suburbia in Foreclosed: Rehousing the American Dream. These efforts are in stark contrast to the infamy of the five major loan servicers  who were sued by the states’ attorneys’ general and are slowly, if at all, implementing the $25 billion settlement that concluded the litigation.  Bank of America, Wells Fargo, Citi, Chase and GMAC could go a long way towards repairing their reputations and the national housing industry by taking a lesson from small Guernsey Bank and allowing innovation to creep into their cookie-cutter approach to foreclosing on American families.