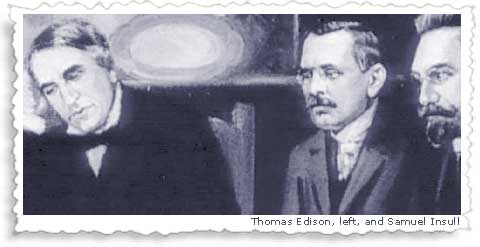 Long before Donald Trump made national headlines for bankrupting his failing Atlantic City casinos, a great but lesser known industrialist named Samuel Insull found himself facing bankruptcy and charges of fraud and embezzlement. Insull had been an important figure in the growth of the national electricity grid and had been the right hand man of Thomas Edison.

What history doesn’t tell us however is that despite Edison’s great fame, he often struggled financially. After Insull joined him the two frequently huddled over the company’s books, mulling over schemes to put off creditors. In matters of finance, Edison deferred to Insull, but Insull himself later said that he himself “knew little or nothing” about the subject. Edison’s assets were tied up in the various companies that supplied Edison Electric. He had no cash and was embarrassed that he could barely meet his household expenses.

Insull’s insight eventually helped Edison recover from near bankruptcy. Insull became the CEO of General Electric, a company Edison had founded. After a merger with a competitor Edison lost control of the company but Insull thrived. Edison’s businesses would have gone on to great success if they followed the growth of the companies that Insull went on to manage after he emerged from under Edison’s shadow. Insull was a better businessman than Edison would ever be.

In the 1890’s Insull moved to Chicago, then a “frontier town.” He acquired generators, an arc light company, coal mines and a steam railroad that provided vertical integration for his ultimate goal: a six thousand square mile regional power network. From The Wizard of Menlo Park: How Thomas Alva Edison Invented the Modern World (by Randall Stross):

Insull became famous in his own right, even appearing on the cover of Time magazine in 1926. He gave generously to many charities and used his clout to press Chicago’s wealthiest to join him, even if they did not share his color-blind enthusiasm for some causes, including the Chinese YMCA and the education of African doctors. He paid to send a young African American singer on a study tour of Africa and an African American Pullman conductor on a European trip.

Insull put everything he had into the battle against impersonal economic forces far more powerful than he. His personal fortune had increased from around $5 million in 1927 to $150 million in 1929. But his wealth resided entirely in shares of his holding company, the publicly traded Insull Utility Investments. By 1932, those shares were worthless, and he had fallen so far in debt that a banker described him as “too broke to be bankrupt.”

The other investors who also lost everything turned on Insull, and he was eventually indicted for mail fraud, embezzlement and violations of the Bankruptcy Act. Insull’s integrity was ultimately vindicated as he was acquitted in three trials during 1934 and 1935. Insull did not live long after his downfall and disgrace, dying in Paris in 1938.

Insull’s story is a powerful account of how someone in business can appear to do everything right, and still end up in bankruptcy. Much like Donald Trump.