Special Report: Foreclosed Rehousing the American Dream at the Museum of Modern Art 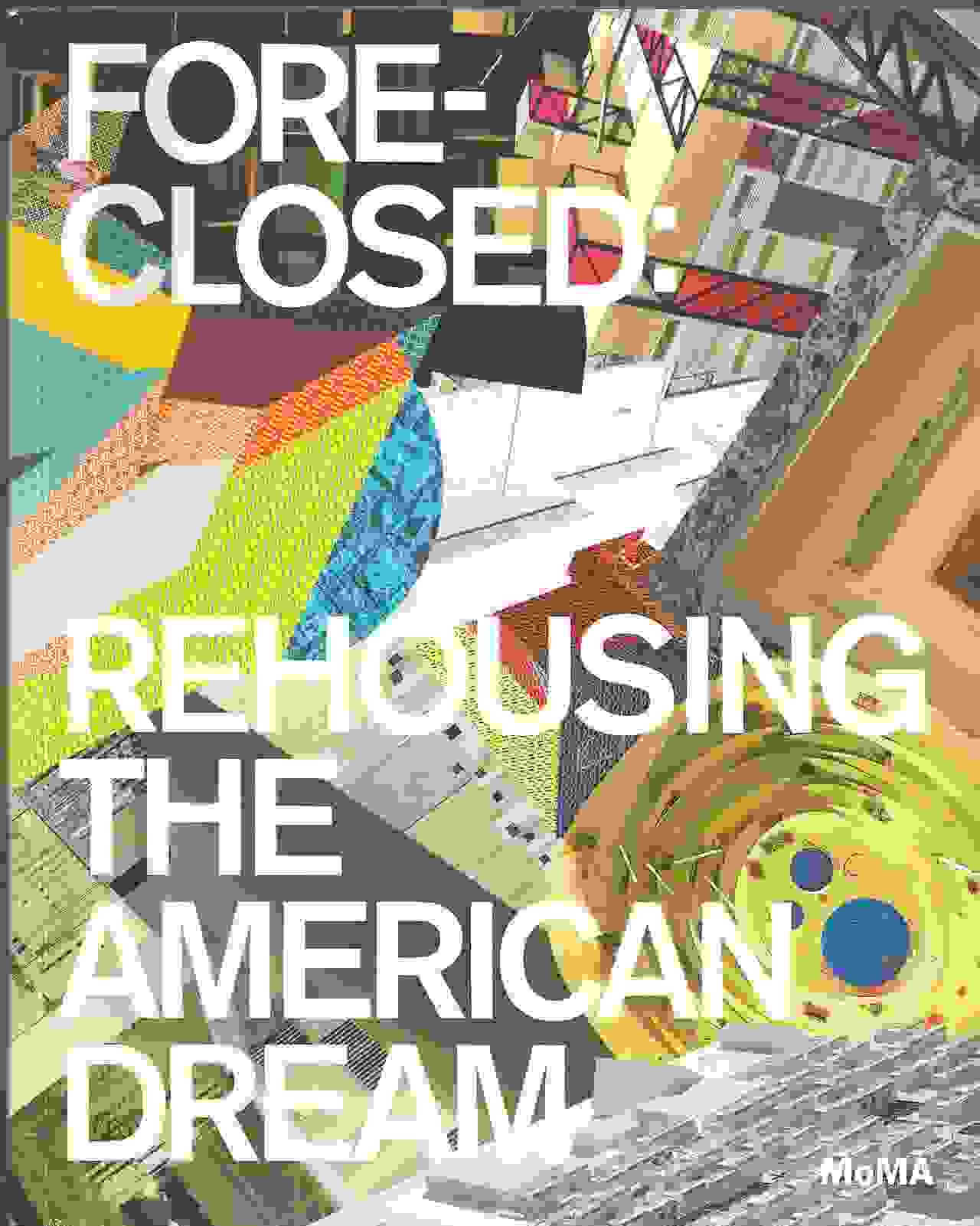 The mortgage and foreclosure crisis that continues to sweep our country has been national news for almost five years. Media accounts tell different sides of the suffering and the attempts to alleviate the suffering. Neighborhoods, towns and even cities are threatened with long-lasting blight and devastation as homes become vacant and vandalized. Legislators draft emergency laws to force mortgage servicers to become more accountable to homeowners seeking modifications. States’ Attorneys General sued the major servicers, Bank of America, Wells Fargo, Citi, Chase and GMAC, and settled for $25 billion, apparently with mixed success.

Anecdotal horror stories abound, with homeowner after homeowner describing their nightmare experiences from within the loan modification labyrinth. The President of the United States has announced several programs trying to help the problem. Bank of America conducted a national moratorium on foreclosures. Courts around the country attempted to interpose mandatory mediation before a foreclosure case could proceed. Short sales of underwater homes have become commonplace.

While all of these views through the prism of this national disaster describe our collective efforts to lessen the pain of the ordeal, few voices have been heard trying to describe what our country will look like after we emerge from the crisis.  What flaws in our culture lead to this catastrophe and what needs to change in the way Americans buy homes, develop property, and raise our families?

Early in the crisis, the Museum of Modern Art in association with The Temple Hoyne Buell Center for the Study of American Architecture, Columbia University, New York, recognized that daring and visionary minds needed to scrutinize the underlying assumptions of success and self image that cause the phrase “The American Dream” to automatically translate into a tableau of a detached single family home in a residential subdivision with a lawn, a driveway and a white picket fence. MOMA assembled a series of teams to study the foreclosure rates and the problems besetting five diverse “inner ring” suburbs: Cicero Illinois; Orange New Jersey; Rialto California; Temple Terrace, Florida; and Keizer, Oregon. This study resulted in en epic exhibit that displayed at MOMA through the summer of 2012 and a 182 page companion volume entitled Foreclosed: Rehousing the American Dream. The companion book explains that before long, the MOMA teams discovered that

[T]here is scarcely such a  thing as a typical suburb anywhere but in the American imagination. This imagination is in a state of shock and anxiety brought on by the collapse of the model of economic growth and abundance that has fueled the American suburban dream for the last sixty-five+ years – by scenes of houses boarded up even in formerly affluent areas, of neighbors in foreclosure, of houses worth less than the outstanding sums on their mortgages.

[The exhibit]  sets out to address this complex national emergency, at once a cause and a symptom of the mortgage-default crisis, on which the project seizes as a rare chance for fresh thinking. While architects, urban and landscape designers, and infrastructure engineers can do little directly about the problem of foreclosed mortgages and households “under water” (that being a crisis of the financial architecture of America), they can address the risks of a downward spiral of disinvestment in suburbs.

Foreclosed, page 12. The teams’ vision of these reinterpreted suburbs is breathtaking: 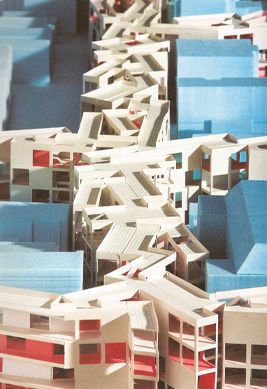 Despite Orange’s accessibility – commuting time to New York averages twenty-five minutes by car or forty minutes by train – there is a significant rate of foreclosure there, and a high rate of unemployment. The Foreclosed team noted that some 15% of the land within a half mile radius of the Orange train station is publicly owned, either as municipal property, in buildings such as schools, or as vacant lots. In addition, some 22 percent of the site is occupied by public streets and sidewalks, laid out in a traditional gridded town plan. Having calculated that annual maintenance expenses for infrastructure exceeds $640,000, the team proposed eliminating many streets and replacing them with new, three story high, mixed use structures offering a mixture of commercial, office, and residential spaces.  The proposal is intended to reduce the tax burden on an economically challenged city and to redevelop the street as a new economic engine. 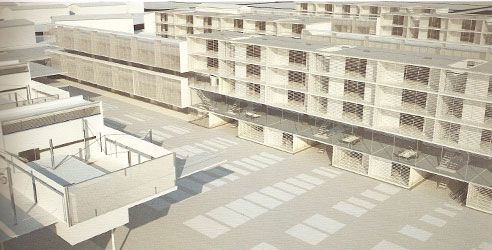 Temple Terrace, located near Tampa, is a town of 22,653 that has been following a development model focusing on the creation of a “downtown” through a public/private partnership to redevelop 225 acres around a major intersection near the city’s southwestern border with neighboring Tampa. The town is a classic low-density city/suburb of primarily single-family houses, and has been hit hard with a foreclosure rate approaching 7.4%, with 30% of homeowners paying more than 30% of income on housing, the normal upward limit for the housing expense in a family budget.

The MOMA team sought to reinterpret the 225 acres by reconfiguring a two-mile-long commercial site that would increase population by more than 10,000 people, adding a new, linear town center designed to ease a daily life led with recourse to cars. 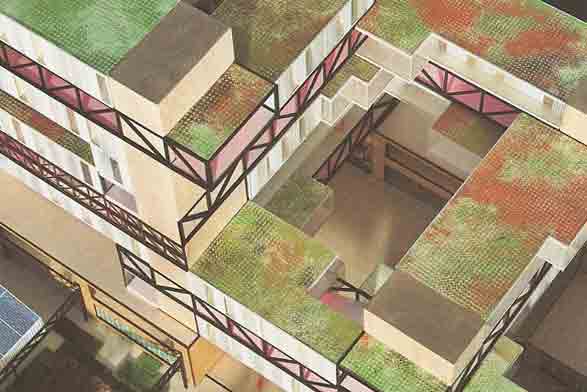 Cicero is an aging inner-ring suburb set on the edge of metropolitan Chicago, and along freight rail lines predicted to increase in capacity. It has lately become an arrival point for new immigrants to the region, the great majority of them Mexican and Central American. Cicero has experienced a high rate of foreclosure.

“The American Dream has always been about the freedom to remake oneself. America used to support that goal, but now impediments have been put into place. Our project is trying to remove those impediments. The American Dream for new arrivals is not about escaping the city for a rural refuge, it is rather a dream of opportunity, education, starting a business, helping one’s children succeed.”

The team set out to create new housing types able to mix families and generations living and working, in ways that are generally prohibited under existing zoning codes. 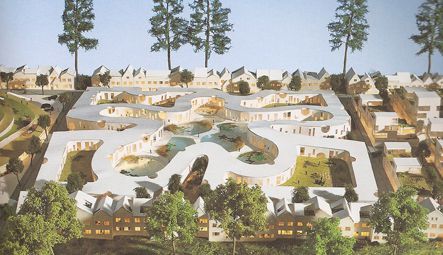 Keizer is a suburb of Portland that lies between Eugene, Oregon and Seattle, Washington. The key characteristics of Keizer, Oregon, the site selected in the Pacific Northwest, include a significant poverty rate and a relatively diverse racial makeup.

WORKac, the MOMA team exploring solutions for Keizer asked “what if we could live sustainably and close to nature?” They discovered that cities in Oregon are required by law to establish an urban growth boundary to protect open land outside city borders. This encourages densification within existing boundaries  and retains otherwise highly desirable forest or farmland.

WORKac proposed reversing the 2010 sale of 28 acres for development with a series of big box stores and instead designed a model to bring higher density and more sustainable living to the metropolitan edge. This vision of suburban living combines the density generally associated with large cities with a direct connection to nature. 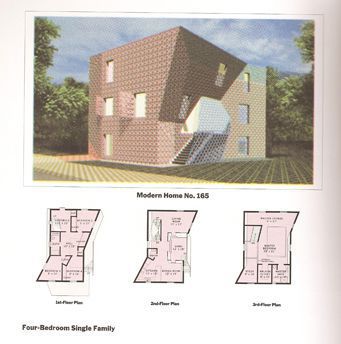 Rialto, in San Bernardino County, is emblematic of the California housing crisis, where years of rapid increase of housing prices was followed by the implosion of value and a torrent of foreclosures. In this community of nearly 100,000, the foreclosure rate is 11.4% and 48% of their population is paying more than 30% of their income towards housing.

A conspicuous symbol of the housing failure is Rosena Ranch, a large residential subdivision under planning and construction since 2004. Since 2008 work has ground nearly to a standstill. At one end of the site, only 10% built, nearly identical large-scale houses stand right on top of each other. At the other end snake acres of terraced but unbuilt lots.

The MOMA Rialto team, Zago Architecture, set out to “relax the boundaries” of suburbs as found, creating a richer mix of uses, housing types, living situations and landscapes than the “serial repetition” of individual homes with a driveway and a patch of lawn.

Lawyers, judges, mediators and bankers constitute the “financial architecture” of America trying to work our way through this crisis. As we labor through, we should not lose sight of the vision from Foreclosed: Rehousing the American Dream of the  architects, urban and landscape designers, and infrastructure engineers who are attempting to rethink our suburbs and free the American Dream of its bonds to single family detached homes.